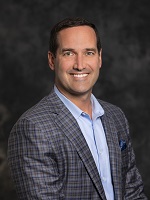 Jason Dunkel, MBA, M. Div.President and CEOAdventHealth North Pinellas
Jason Dunkel has worked in healthcare for 13 years and became CEO at AdventHealth North Pinellas in June of 2018, after previously serving as VP of Operations/Business Development. During his tenure at AdventHealth North Pinellas, he has successfully led a variety of transformational projects including a 24-bed offsite ED, interior renovations, new exterior, on campus ED, and infrastructure upgrades. Prior to his hospital career, he owned and operated a pediatric urgent care in Chattanooga, TN, (PM Pediatrics) that contributes care for thousands of children each year. However, Jason is most proud to be a husband to his wife, Katelyn, and father to his four girls: Sophia (12), Arabella (10), Katherine (8), and Alaithea (3).
Session Participation:
SPEAKER: The Continuing Evolution of EDs: A Brief Look Back & Dive into the Future