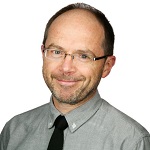 From waiting rooms to meeting rooms and patient wards to open offices, thoughtful ventilation design is a key part of keeping people safe in shared spaces. The type of ventilation system in these spaces plays an important role in preventing the transmission of COVID-19 and other pathogens that are transmitted through respiratory droplets.

As we learn more about how COVID-19 is transmitted, we look back on past global threats like SARS and H1N1, and we consider a future where another health threat is likely. We can no longer treat ventilation systems like an afterthought. Occupants and visitors to a building—especially in a healthcare setting—need assurance that the air they breathe is healthy and clean. In a changed world, with increased awareness and concern about the transport of infection, the casual implementation of standard ventilation systems in new buildings will no longer be acceptable. Further, for existing buildings, owners are seeking assurances that their buildings will be viewed as safe. Implementation of mitigation measures needs to be effective, timely, and economical.

COVID-19, along with H1N1, SARS, and the common flu, are transmitted via respiratory droplets. These droplets, emitted from an infected person when they sneeze, cough, talk, and sing, etc., may contain a virus particle. As the droplets leave the mouth they all start to evaporate. The larger droplets will land on the floor, others will immediately be carried by air currents, and some will start to drop but evaporate enough that they start to float also. Most of the droplets will evaporate completely. If there was a virus particle in the droplet initially, it will remain free to float around the space. This means that ventilation systems must be able to reduce the concentration of droplets/pathogens in the air as quickly as possible.

There are three main types of ventilation systems. These are described as follows:

Mixing Ventilation is the most common ventilation system in existence. In this case, diffusers mounted at or near the ceiling push air into the room at a reasonably high speed with the intention of mixing the air as rapidly within the space as possible. The ceiling-based extract draws air out of the room and roughly room-average conditions. Rooms ventilated in this manner are characterized as having approximately uniform contaminant and temperature conditions except right near the supply air point.

Displacement Ventilation is perhaps the least common approach of the three. In this case, air is delivered at floor level, at low speeds, where the intention is to minimize the mixing. The air runs across the floor and then lifts towards the ceiling drawing contaminants upwards with it. Sometimes called plug flow because of the unidirectional nature of the flow, the ceiling-based extract removes contaminants above people’s heads without driving them back into the occupied zone. The system is characterized as having the highest ventilation efficiency and air quality with the highest temperature gradients between the floor and the ceiling of the three systems.

Underfloor Air Distribution (UFAD) is a combination of the two above systems and is gaining in popularity. In this case, air is delivered at floor level through a diffuser encouraging rapid mixing of the air, but only within the occupied zone. Once above 12.5m (4 ft.) approximately, the air starts to lift upwards, like the displacement system, with additional mixing avoided. In this case, the objective is to make the occupied zone well mixed, with the space above the occupied zone stratified to prevent contaminants from coming back down.

A fourth system, called Task Ambient Ventilation uses personal supply points to deliver air directly to the occupants usually at their desk. This system has not gained much adoption.

In the early days of COVID-19, there were articles reporting that a ventilation system had transmitted the virus. This was an unfortunate choice of words. Ventilation systems consist of diffusers, ducts, dampers, filters, fans, and cooling coils, etc. In the cited example, it was the air currents within the space that caused the transmission of the virus. These air currents are setup by the air distribution within the room, which is part of the ventilation system, but can also be setup in a naturally ventilated environment. Although some studies show that traces of virus droplets have made their way into returns and duct work, there is no evidence that the virus is still viable and can be spread through the system.

These recommendations included maximizing the amount of outside air, keeping systems running longer than usual—24/7 if possible—and maintaining Relative Humidity (RH) and temperatures within certain bounds and filtration. The filtration was recommended both within the system at the air-handling unit, but also within the room. The use of filtration has a similar impact as ultraviolet germicidal irradiation (UVGI)—they eliminate the virus. While filtration removes a fraction of the virus particles each time the air passes through the filter, UVGI will kill the virus if it receives enough of a dosage.

Computational fluid dynamic (CFD) simulations were conducted of a typical waiting room. This room could also be a meeting room or other shared office space. The simulations were setup to achieve good thermal comfort for the occupants and the three ventilation systems described above were compared. One occupant, shown with the red head, was assumed to be ill. 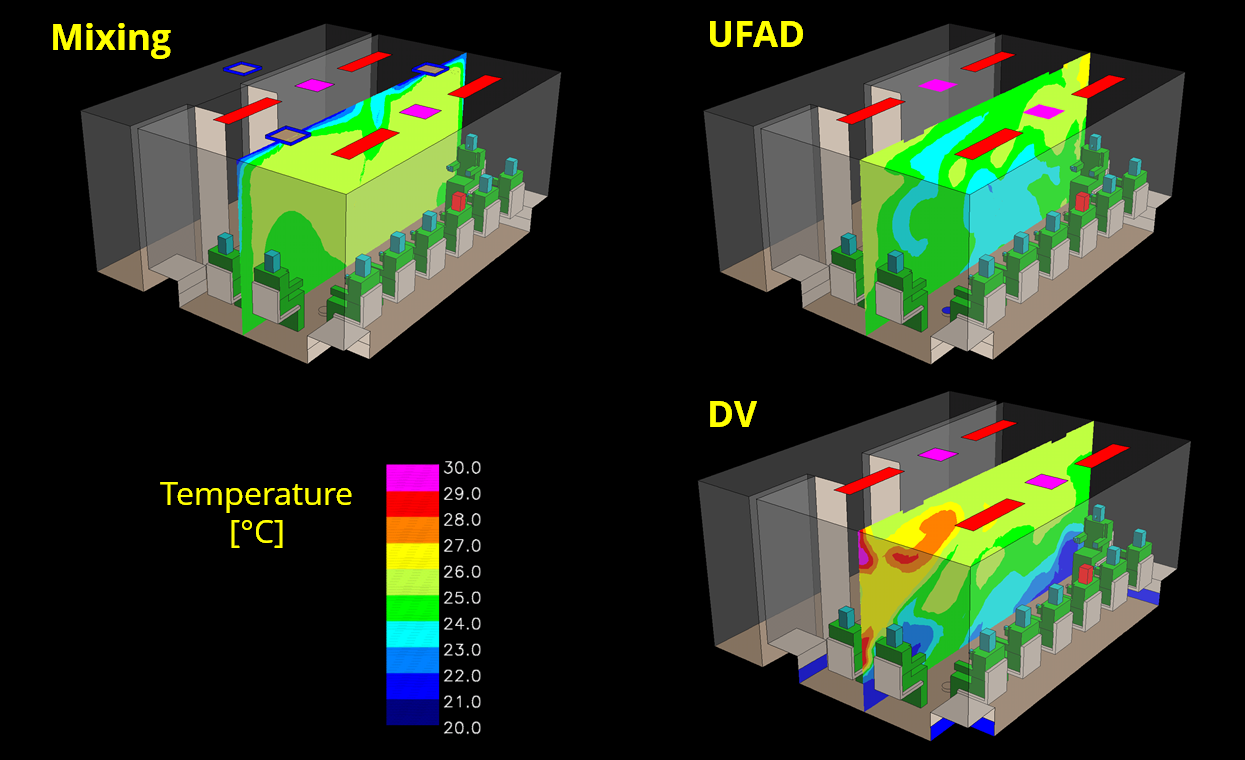 The images in Figure 2 show a zone in which a contaminant would exist at concentrations of 200 droplets per breath. In this case, we have assumed that the individual with a red head (clearly visible in the lower right image) is ill and coughs or sneezes. If a typical sneeze has approximately 100,000 droplets released, and we assume for the moment that none evaporate or have virus particles in them, then the volume inside the cloud has a concentration on the order of 1/500th of the concentration. That is 200 droplets per breath.

What is significant in these scenarios is that the ventilation system in each case is doing precisely what we have asked of it:

The mixing system is mixing the droplets around the space as rapidly as possible. The reason that the foreground in the image is not completely greyed out is because the ceiling supply air diffuser at the front of the image is diluting the contaminant in that zone—the ill occupant is at the other end of the room. If we selected a dilution of 1/1000 to present (100 droplets per breath), then it is likely that the cloud would expand and fill the room.

On the other hand, the displacement ventilation system is doing its job. The blue surfaces are introducing the air with minimal mixing and the contaminants are being lifted to the ceiling by the thermal plume around the ill occupant. The rest of the room is clear.

Finally, the UFAD results are the most interesting: the UFAD system has swirl diffusers in the floor designed to mix the room up in the occupied zone. There are swirl diffusers at multiple locations in the floor. The swirl diffuser near the ill occupant mixes the air up within that space and the diffusers further away in the room are mixing that air locally. The two sets of air do not mix together. Hence, near the ill occupant, there is good mixing in the occupied zone with the contaminants then pushed to the ceiling. Further away, there is less contaminant because the local mixing did not drive the contaminants across the room. 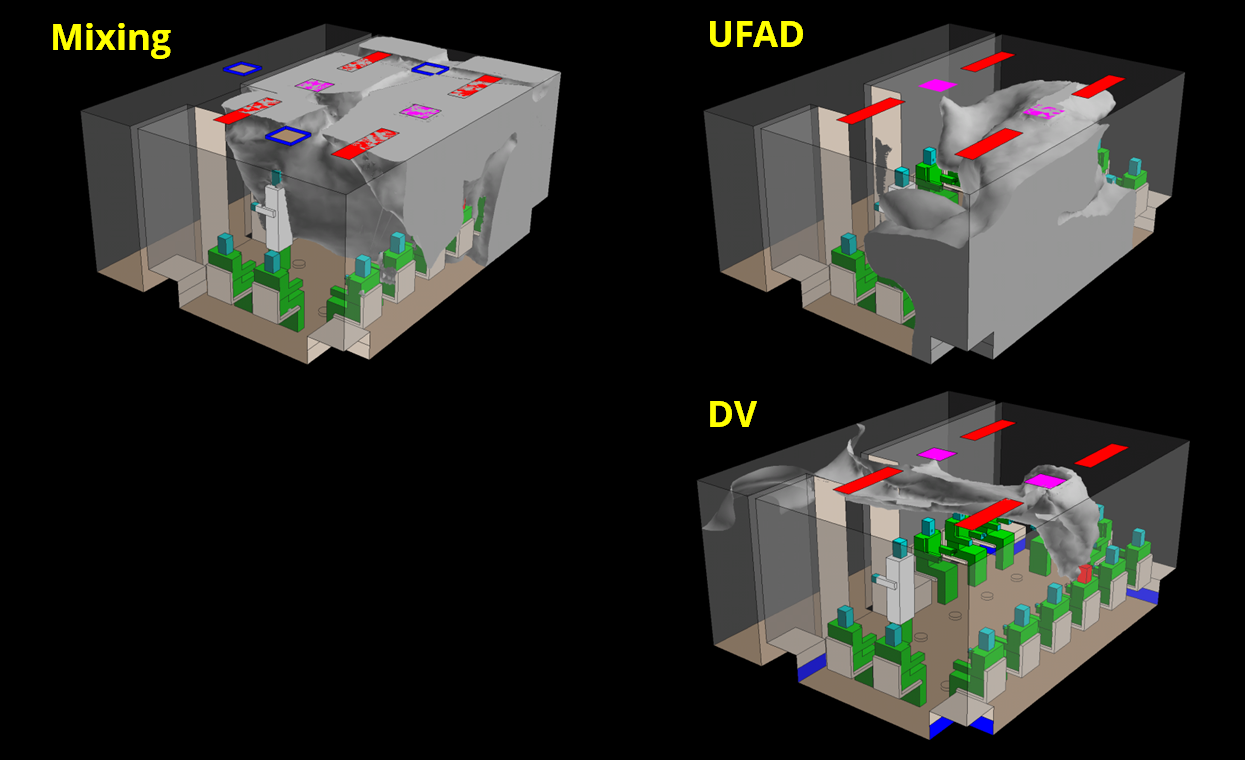 The use of in-room filtration typically involves placing a fan in a box to draw air through a filter. This means that the fan needs to push air back out into the room. Depending on the targeted clean air delivery rate (CADR), the flow rate through the filter/fan system can be on the same order of magnitude to that of the room air ventilation rate. If the room has one in-room filter, then the local disturbance to the air flow can be significant in that the in-room fan will stir up the room and enhance mixing.

On the other hand, ultraviolet germicidal irradiation (UVGI) systems need to be kept away from people. The wavelengths of light that kill viruses, and COVID-19 is very susceptible to UVC, are dangerous to humans. Hence, in-room UVGI tends to be installed at the ceiling level–referred to as upper-room UVGI. These are sometimes passive (without fans) but can also have fans installed (active) to draw air through “kill-zones” at the optimal flow rate. This maximizes virus UV dosage to target the virus(es) of interest. It is important to note that the available data on the efficacy of UVGI in health care settings does not conclusively suggest that it helps. However, there is insufficient data to conclude it has no value. The purpose of the discussion here is to note how best to use it.

When one starts to consider how best to introduce in-room filtration, the type of air distribution within the room is critical. The use of an in-room filter will mix up the space. The UVGI systems need to be installed at ceiling level. If not done with due care, at best one might install an ineffective system. At worst, one might do more harm by bringing contaminants back into the breathing zone.

Therefore, given how displacement ventilation systems work—minimizing mixing and preventing air at the ceiling from dropping down—neither the use of in-room filtration, nor upper-room UVGI systems, make any sense. The filter/fan combination will destroy the stratification setup by the displacement system and the air at the ceiling will not come back down to the occupied zone. One could argue that using UVGI to kill the viruses before it enters the extract duct is a good idea, but it does nothing for the occupants of the room.

In contrast, the mixing system is ideally suited for both upper-room UVGI and in-room filtration. In fact, the additional mixing of the in-room filtration and active UVGI will help to circulate air within the room so that the stagnant zones are minimized. Each time air passes through either system, the viable virus burden will be reduced, thus increasing safety for the occupants.

Once again, the UFAD system has the most nuance. The system is intended to mix up the air in the occupied zone and, ideally, prevent contaminants above from coming back down to the occupied zone. Any increased mixing, therefore, needs to occur only within the occupied level. If this can be achieved with in-room filtration, that is helpful. However, as was shown in Figure 2, the air from one side of the room might not be mixed with the other side. Hence the use of only one in-room filter system will either not offer protection to everyone in the room, or it will overly mix the room, destroying the stratified layer. Multiple in-room filter systems are, therefore, best required. For the upper-room UVGI system, the same argument as the displacement system applies for the UFAD. Use of a fan at the ceiling will potentially break the stratification layer and any virus-free air will not make it back down to the occupied zone.

The discussion above has described an important thesis as we begin to return to shared workspaces. The use of in-room filtration and UVGI technologies will be helpful. It must, however, be implemented carefully. As described above, the recommendations are:

The discussion here has intended to highlight how one must take care in installing different mitigation systems within a room. It is possible to do harm by installing the incorrect system with some air-distribution systems. Ultimately, for the UVGI approach, if one has access to a system that is self-contained, and can be safely mounted at the floor level, then both the displacement ventilation and UFAD systems might benefit. However, this approach will come with additional risks and is best done with experienced ventilation assessment and consultation. 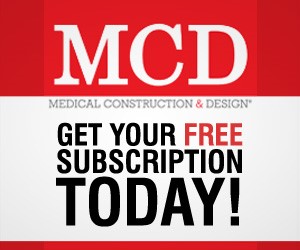